Wolf Creek was PACKED today- but no lines and the livin’ is easy!

Published by summitski_jeff on December 23, 2017

Conditions are still early season, but there’s snow! Eight new inches thanks to the storm yesterday, and that puts the all natural depth at twenty inches midway.

I decided to head out and test drive some new Flow rear entry bindings and a pair of Vans boots I just got at the Summit. I’ve been wanting rear entry boots a while, because I’m always envious of the riders who can hop off the lift and zoom off while also strapping in- I don’t know how they will be back country but they’ve got traditional straps too, so I can always just undo those if I get in a jam. And besides which, it’s not like other people have not taken rear entry bindings into the back country. So I bet I’ll figure it out.

Blue skies and warm temps prevailed around 11 am after a VERY early cold morning here in Pagosa- below zero in some areas! – and not much wind made for a very pleasant day indeed. I scooped up everything and hopped in the truck and discovered that about the entire universe was on the mountain today, which made for lots of fun and festivity, and so nice to have our visitors here! 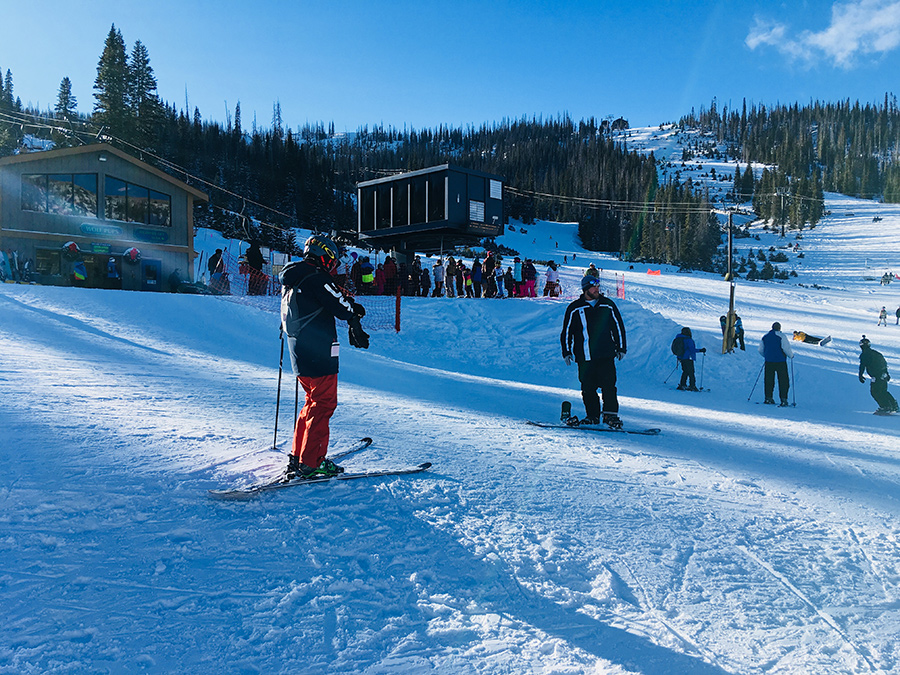 All the lifts were running- I forgot to go on the new one, which looked to be running- but I wanted to go all the way up to Treasure. I had a pretty good run down, considering it was getting on toward dusk by then and there wasn’t much wiggle room between tons of skiers trying to get one more run in, so I dropped in to some pow off the edge of that steep path-like part off the lift and I guess I’m just getting back into it, because yup, I ended up on my derrier and had a dig to get out. But no harm done, just a little bit more cardio-vascular exercise. I didn’t have any problem getting out of my bindings, and after a few runs, I’d gotten the tension set up just right and gotten a lot faster at getting into them quick off the lift. Still not just hopping off and strapping in, but, almost!

My new Vans boots are like this modern miracle of science and engineering. Well, consider the fact that I spent a winter in the back country with old rental boots I got at the Humane Society that sort of didn’t lace on one foot because my dog chewed them, anything would be an improvement, but I am totally in love. I would even go around wearing a Vans T-Shirt. I really would.

If you don’t own a pair of Van’s boa boots, go get some. Now. I can FEEL MY FEET. Wow what a concept. They are SUPER comfortable, and I can walk around in them without much problem too, when not strapped in. They are clearly going to be very easy to slide into my snowshoes, which my old boots weren’t- since I lug my board in my Dakine backpack for miles and miles on my snowshoes while I climb up, which takes hours, and then I ride DOWN, which takes about fifteen minutes. Don’t ask. You just have to know. Still too rocky at Lobo Pass for these somewhat insane activities, but I am SUPER STOKED about these boots.

I ride around on a pretty big old board that I got for fifty bucks on e-Bay- it’s a Ride Fleetwood, and I love it because it’s like a giant boat in the powder when I’m back country. It’s not so great on groomed runs at all times, because like its name, it’s a big old boat. But my bindings made it A LOT easier. And now I’m looking at some of the sick boards at the Summit right now. There’s a cute Never Summer in the sale rack outside, by the way. And have you seen the super dope Never Summer with the planets and the moons on it? OMG. My favorite one is the new West though, with the Bison on it. Since I love huge powder boards, I am definitely eventually going to have to figure out how to save up my pennies for that one. But seriously, considering what slogger I am out there, I do get envious when I see other chicks hopping over jumps and doing switches and 180s and stuff. So yeah. I think I’m gonna have to try out some of the coolio Demo boards the Summit has and see if I find something a little more nimble and then save the big old boats for Lobo and my particular form of insanity.

Anyhow, signing off- we should be getting more snow over the weekend sounds like, so get yourself over to the Summit and get a rental if you don’t have your own kit and head on up- tons of fun, friendly folks, and no lines!